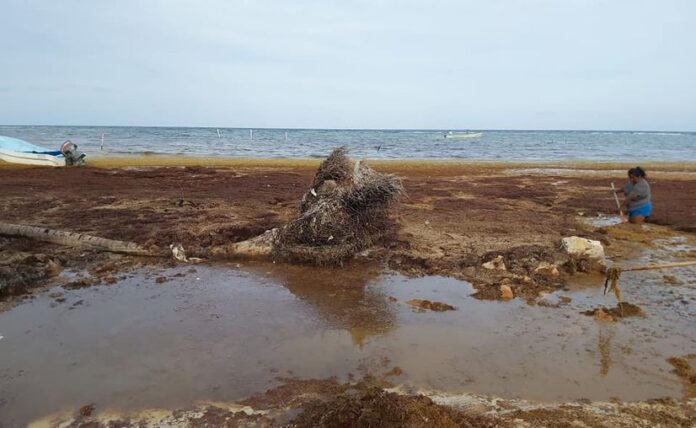 Despite the efforts of the Secretary of the Navy and local businessmen, it has not been possible to remove sargassum from the beaches of Mahahual and XCalak.

The representative of the Titanes del Caribe cooperative, Gonzalo Rivero Cruz, explained that although they collect about two tons of sargassum daily, more islets of said algae arrive every night, which has made it difficult to remove it completely.

He added that this situation not only affects tourist activity but also the fishing community since it is practically impossible to take the boats from the dock to the open sea.

“The sargasso carpet occupies an area of ​​up to 100 meters from the shore of the beach towards the sea. In some areas, it is so thick that our boats cannot travel. We have installed some handmade fences to make a kind of sargassum-free zone, but unfortunately, it is a temporary measure, as they are quickly overwhelmed by the algae “, says the fisherman.

He added that they have presented this problem to the Municipal Government of Othón P. Blanco, but the last response they have received is that it will be until June 17 when the sargasso barriers are installed.

“Of course, the larger companies, which have better boats, are not affected by this situation, since they can go through the sargassum carpet without problems. But for small fishing cooperatives, the only option is to leave the boats in free zones of sargassum, 40 kilometers to the north, which represents an extra fuel consumption that increases our expenses and reduces our income, “he said.

He cited that the actions of the Secretary of the Navy would be more effective and faster if coordinated with the work of the Municipal Government and the efforts of the local population.

According to the Sargasso Monitoring Network of Quintana Roo, from Xcalak to Punta Maroma, in Tulum, a massive arrival of sargassum is expected in the following month.