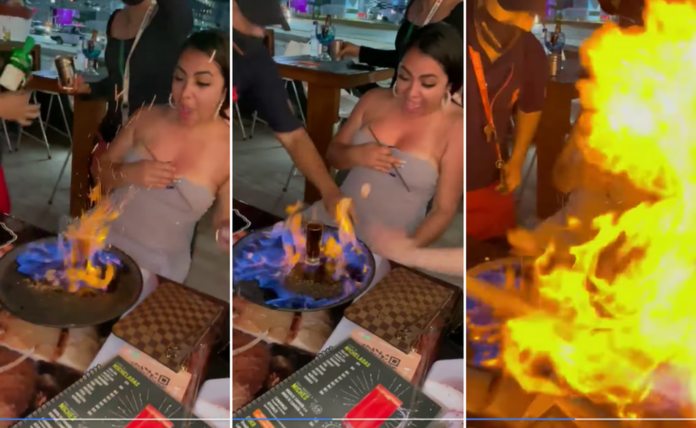 Civil Protection confirms that waiters did not report the incident to 911.

The Cancun Civil Protection Directorate will inspect the restaurant bar “Las de Guanatos” in the Cancun bullring after the accident in which a tourist suffered second-degree burns on her face from a flaming drink.

According to the authority, their action protocols will be verified, especially since they serve drinks of this style, since there is no report of the 911

“We have to verify if it is true that they did not provide aid because they have an action protocol for these cases and they should have acted and called 911”.

If it is found that the due protocol was not followed, the establishment will be sanctioned with a fine that can reach up to 300 UMA (26 thousand 886 pesos) and could also be closed.

“It depends on how the staff reacted. If it was in accordance with their protocol, they will be fined because at the end of the day it is an accident and there will be a fine, but if they did not act as they have to act with the protocol, they have to analyze whether the closure is appropriate ”.

The authorities assured that no regulation prohibits the elaboration of flambeed drinks or foods, so the restaurant bar continues to operate.

A birthday you will never forget

Marissa Daniel, an American tourist who suffered second-degree burns from a poorly served drink on April 4 , blamed the waiters of the Las de Guanatos restaurant bar, located in the Plaza de Toros de Cancún, for the damage to her person.

Through a message on her Facebook profile, the woman relates that even the staff did nothing to help her put out the fire that burned the left side of her left face, arm and ear, caused by serving a flamed drink.

“The waiter served my friend a ‘shot’ that was set on fire. The fire came out of the tray and burned a friend’s leg. For some reason, the waiter continued to pour more alcohol onto the tray and caused an explosive fire towards me (…) The staff here reacted extremely badly to the situation. They didn’t help me or offer me help, they just looked at me ”.

He warned that he will seek to take legal measures against those responsible for this accident and against the establishment, for causing this accident.

The victim posted a video on their social networks where you can see the moment of the accident.

In Marissa’s original publication, she relates that the place of the events was the bar “Las de Guanatos” located near the Cancun bullring, and that after an hour of the publication of the video, it was removed from the platform.

This was at Las de Guanatos in Cancun, Mexico. I’ve only had my post shared for less than an hour and they’ve deleted …

The young woman questioned the action of the waiters at the bar:

“On April 4, 2021, I came to this restaurant with a group of friends; The waiter served my friend a drink which they set on fire; the fire came out of the tray and on my friend’s leg. For whatever reason, the waiter continued to pour more alcohol onto the tray and caused a massive explosive fire in my direction. “

Marissa suffered severe burns and said she was traumatized. He also stressed that the staff did not know how to act in the face of an emergency.

“I have suffered 2nd-degree burns all over the left side of my face, left arm, and left ear. I even lost some of my hair.  The staff here reacted extremely badly to the situation. They did not offer any help or assistance; they just looked at me. speechless. I am traumatized, to say the least and seeking to take legal action against those responsible and this establishment. “

They ask for help for Marissa

After the accident, a fundraising campaign was started on GoFundme in which they ask for help to pay for Marissa’s medical bills.

Until the writing of this note, the bar has not published anything about the incident on social networks and it is unknown if it refused to take care of the young woman’s medical expenses.