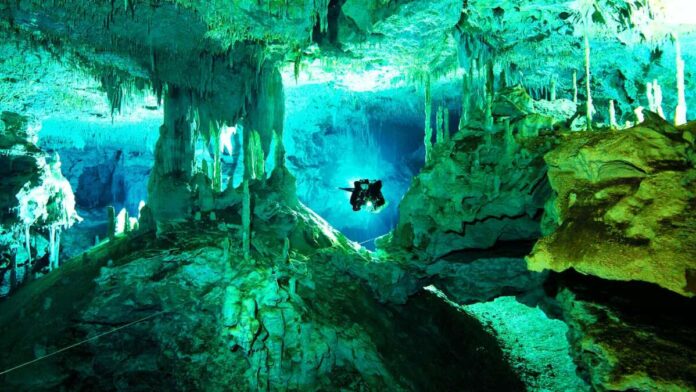 In Quintana Roo there is the largest underwater cave in the world discovered in 2018, which is formed by the union of two cenotes: Sac Actun and Dos Ojos, and whose extension is 347 kilometers; However, experts believe that it could grow as the investigations are carried out, as they assure that it could be a “monster” of up to a thousand kilometers that in its entrails houses human and faunal remains from different times.

This largest underwater cave in the world was found by the National Institute of Anthropology and History (INAH) during the development of a research project.

The announcement of this discovery was made in February 2018 at the National Museum of Anthropology and History.

The discovery of the largest underwater cave in the world was part of “The Great Mayan Aquifer”, a research project of the subsoil of the Yucatan peninsula, whose objective was to strengthen the understanding of the delicate connection between the aquifer, the environment, and the man through the exploration, documentation, and dissemination of natural wealth and the cultural heritage it contains, which would lead to its adequate protection.

The research was an initiative of the underwater archaeologist Guillermo de Anda and had the support of the Aspen Institute Mexico, the INAH, the Technological University of the Riviera Maya, National Geographic, and the Development Bank of Latin America.

Guillermo de Anda explained that with the establishment of the connection between Sac Actun and Dos Ojos, in Quintana Roo, gave rise to the largest flooded cave in the world.

“It is a very rich system in contexts, depths, and beauty (…) It is one of the last frontiers in exploration in the world, after the oceans. It is an immense system that goes like a huge labyrinth under the earth, even on the road, and has a system that flows into the sea “

A place that has unique characteristics

According to specialists, it is a place that has unique characteristics, as it contains millions of cubic liters of freshwater, biodiversity, and endemic fauna, among which thousands of crustaceans that are not visible to the naked eye, in addition to having 248 cenotes and 198 archaeological contexts.

“This makes it the most important submerged archaeological site in the world. Another important characteristic is the number of archaeological elements found there and the level of preservation they contain “

The cave could be a temple for the god of commerce

Other findings that have been obtained from this underground cave in Quintana Roo is the DNA of an ancient tooth, which was found in fauna.

The experts did not imagine that there were animals such as bears and they have been able to establish a hypothesis about human interaction and extinct fauna.

“There was an important step of people during a long period of time. In this space is the Pit cenote, a place where we find bones embedded in the wall, which tell us about a catastrophic event. Likewise, we find skulls where the Mayan contexts are mixed with the ancient ones “

Some hypotheses suggest the sacred geography and anthropology of the landscape, as there is evidence of the appropriation of sacred spaces, cenotes, caves, and the modification that the ancient Mayans made in the largest flooded cave in the world.

The specialist explained that another of the findings was that this place stood out as a Mayan pilgrimage and exchange route used a lot by merchants, so it is believed that it was a ritual and sacred point that would make the cave a temple for the god of the trade.

“It is a place that could have been used for rituals. In addition, we found a censer, temples in the areas, and rooms where we have found offerings and ceramic vessels. We also find caves that run throughout the entire system, and somehow we can see them as entrances to the underworld and prominent commercial spaces “

Guillermo de Anda stressed that Sac Actun is a surprising and relevant archaeological site since in this space there is a record of three probable ancient men.