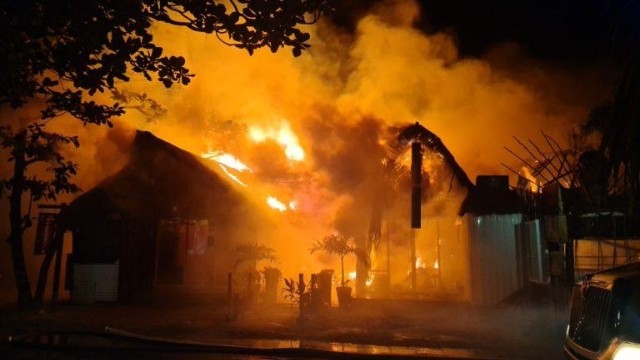 TULUM Quintana Roo (March 27, 2021) – In the last 48 hours, two fires were reported in commercial premises in Tulum, making three consecutive nights with incidents of this nature.

The first of the fires today, March 27, occurred around 1:54 a.m. in an establishment dedicated to the sale of clothing in the Centro neighborhood on Sol Poniente Street between Saturn and Jupiter.

Firefighters immediately arrived and disconnected the electrical power to begin their maneuvers to quell the fire. While the firefighters were fighting the fire, at least three explosions were heard inside the establishment due to some clandestinely stored fireworks.

An elderly person was assisted at the site and was attended by Red Cross paramedics.

After a little more than two hours, they managed to extinguish the fire and cool the area since, at times, the flames of the inferno threatened to spread to adjoining properties. However, it was controlled in time. The causes of the fire are still unknown.

A second fire in less than 24 hours
Around 10:00 p.m. today, another fire was reported in Tulum, the second in the last 24 hours and the fourth in the previous three nights.

This fire occurred in the streets of Colonia Maya. It started in a palapa built with materials from the region and later reached five others.

The firefighters had the task of fighting the fire until they were able to control the situation. As in the other fires, so far, it is unknown what caused the fire, although it has been suggested that it may have been linked to organized crime.