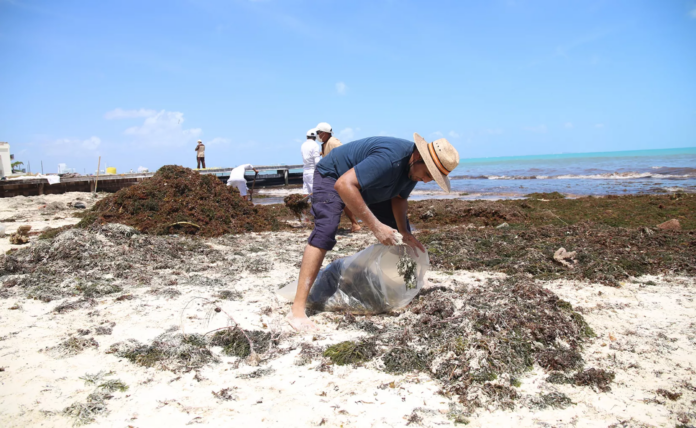 After years of massive sargassum landfalls, there is still no definitive solution to avoid the loss of the main tourist attraction of the entity.

The sargasso threatens the white sand of the beaches of Cancun, Quintana Roo: Although the massive landfall of the alga has trended downward in recent weeks, is a problem that persists and threatens the tourist main attraction of the entity.

Alejandro Bravo Quezada, an expert in marine oceanography, points out that after six years since sargassum began to arrive, there are still no efficient solutions to prevent the degradation of white sand beaches .

The compaction of the sand by the use of machinery; extraction during the harvesting of algae or decomposition of organic matter on the sandbanks; are some of the effects already visible in the short term.

Since 2015, the Ministry of the Environment and Natural Resources (Semarnat) has published a series of guidelines to be followed to prevent the massive recalls of sargassum from generating greater impacts on local ecosystems.

These guidelines, although they have been promoted and updated every year, are not mandatory for authorities and hotels, so they are not always followed to the letter.

This document prohibits the use of heavy machinery to avoid the compaction of the sand.

It is stated that by changing its natural roughness, the angle of incidence of the wind increases, increasing erosion and therefore causing effects on the ecosystem services of the marine-coastal zone, such as beach tourism.

“In areas like Puerto Morelos, the sand is so compacted that a car or bicycle can circulate without problem.”

The use of machinery also puts sensitive species such as sea turtles at risk, as there is a risk of crushing nesting females, newly hatched hatchlings, or eggs deposited in the sand.

Guadalupe Velázquez, a hydrobiologist at the Research Center for Sustainable Development, states that with each sargassum dump that is taken from the beaches there is gradual extraction of sand.

“If multiplied by the thousands of tons that are extracted each year since 2015, the numbers are worrying.”

In the sargassum dumps, it is possible to observe how much beach sand is extracted, due to poor collection practices.

Beach erosion is a phenomenon that has occurred for several decades in Quintana Roo, mainly due to hydrometeorological phenomena related to climate change.

Although erosion from the presence of sargassum is not as noticeable, it is consistent. For oceanologist Alejandro Bravo, the alarming thing is that it is a long-term problem for which there are no solutions in sight.

“When there is sargassum it raises concern and we meet and look for solutions. Sargassum season passes and nobody says anything. The following year we have to start all over again ”.

The sand of Quintana Roo is special. It comes from the Mesoamerican Reef and the parrotfish (Scaridae) are responsible for generating it, according to Melina Soto, from the Healthy Reefs initiative.

Parrotfish gnaw on the calcium carbonate structures of corals and defecate the fine sand, which with the dynamics of the tide settles on the shores.

For that reason, the sand that attracts more than 14 million tourists is fine and white, unlike other beaches in the Pacific and Gulf of Mexico.

But the presence of algae is also damaging the corals and the reef structure.

They are living colonial animals that live in naturally pure waters. The decomposition of sargassum on the coasts causes a phenomenon called “brown tide”, which transforms the color of the water due to the overload of nutrients such as nitrates and phosphates, points out the biologist Rosa Elisa Rodríguez, from the Institute of Marine Sciences and Limnology from the UNAM in Puerto Morelos.

This same nutrient overload, he refers, has killed dozens of hectares of seagrass along the entire coastal coast of Quintana Roo, whose ecological function is also to retain sand and prevent beach erosion.

Alejandro Bravo pointed out that it is necessary for the strategy to focus on the collection of sargassum in the sea, because if action is not taken in the short and medium-term, the beaches of the Mexican Caribbean could have irreversible consequences.