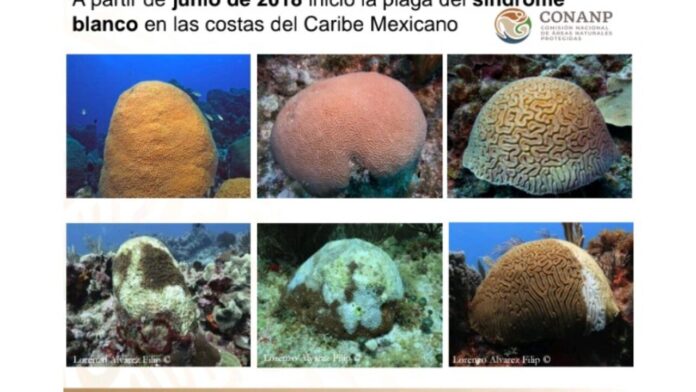 COZUMEL.- Quintana Roo has lost 70% of its corals since the founding of Cancun, 50 years ago, and has only 20 more years to try to take care of the reef barrier, before it is permanently lost, work that depends so much on citizens and the government, declared María del Carmen García Rivas, director of the Isla Contoy Park and the Arrecifes Park of Puerto Morelos.

Interviewed after giving a talk about this problem, the official of the National Commission of Protected Natural Areas (Conanp) explained that the coral reef is a diverse but extremely fragile ecosystem, so urgent actions are required for its rescue, what happens for all.

“We shouldn’t wait for the government to do something; what happens is that the Yucatan Peninsula is porous and full of underground rivers, so everything we do on land affects the corals, “he explained.

Although macro actions are essential, such as modifying the law to prevent the discharge of nutrients to the sea and stop allowing the growth of populations in coastal areas, micro-actions are also important, such as not dumping undesirable substances on the ground, not using acid muriatic, reduce water consumption and wash the house with vinegar, instead of chlorine, for example.

Corals thrive in environments that are almost devoid of nutrients and currently although wastewater is treated, the law allows it to be dumped into the sea still with nutrients. In the expert’s opinion, the state should make efforts to change this and give it a more complete treatment, whether or not it is in the law.

Without corals, an important tourist attraction is lost, which is diving, as well as swimming with sharks (species that depend on the reef). It also aggravates erosion, and the impact of hurricanes, causing millions of dollars in damage, much more expensive than taking preventive measures to care for the species.

In addition to the above, since 2018 a disease known as white syndrome has arrived in the Mexican Caribbean, which devastates hard corals.

“In 40 days what was affected in 40 years, with mortality of up to 80% in various points,” said García Rivas.

This phenomenon is believed to be linked to global warming, and it has already hit other parts of the planet such as the United States and Australia, where it has been tried to eliminate it, without success.

For the director, what would be needed is to select the specimens whose genetics are more resistant to this evil, to cultivate them and plant new coral, but for this a favorable environment is needed.

“As we are more and more people, and as there are no changes in habits, we believe that their situation will not improve,” he lamented. “The populations that live on the coasts are at risk and we must prepare.”

Puerto Morelos, for example, has just approved an Urban Development Plan that is the opposite of what is needed, and that if carried out will have a brutal impact on that national park. (SIM Agency)