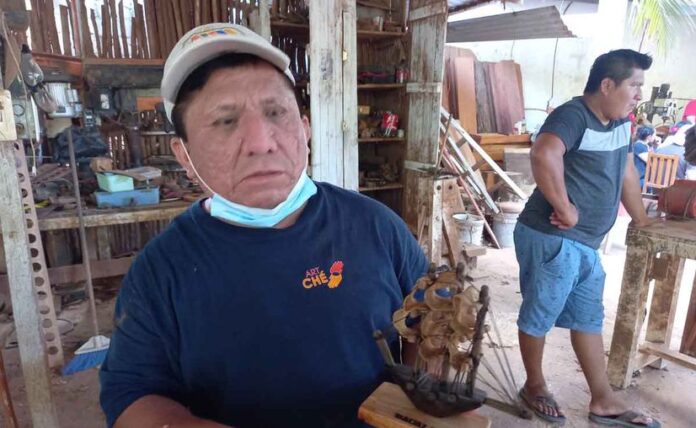 The artisans have managed to survive by offering their products in other states of the country.

Bacalar artisans have not had support during the pandemic, but they have managed to survive by offering their products in other states of the country, due to the lack of support from the municipal and state governments.

This was denounced by Celso Cumul, president of the “Kiich Pam” Cooperative, which brings together artisans from the towns of Buenavista, Lázaro Cárdenas, Divorciados, Martínez Roos, Buena Esperanza, Altos de Sevilla and Bacalar.

” We work wood crafts, vegetable fibers, seeds, handmade jewelry, textiles and honey wines, which we send to Los Cabos, State of Mexico, Nuevo León among our main consumers,” he commented.

He said that without any kind of support for marketing they manage to invoice more than 3 million pesos a year, but they lack the drive to take the product outside the State and promote it at Fairs and craft exhibitions outside the country.

” We have asked for support to bring the product and publicize the Bacalar brand, at events throughout the country, but they have never supported us,” he denounced.

In addition, in Bacalar they have asked the municipal administration for spaces to display and sell their products in the first square of the city, however, they have been denied, sending them to a corner that is difficult for tourists to access.

The president of the artisans said that the pandemic harmed artisans and they were affected economically since most of them are exclusively dedicated to selling their products in the local market and do not have enough means to survive in this pandemic.

I assure you that they must be given the opportunity to work. Therefore, they ask the authorities and the Bacalarean population for support and understanding; for its economic reactivation during the rest of the year.

“ Although they sell in the city with the aim of seeking a better life, with the Covid-19 pandemic, artisans have been affected by the few sales they make per day. Merchants go out to work every day with the hope of being able to sell something among passers-by, it has been very difficult, ”he said.

Since the situation has been careful, as they have been abandoned by the government, just a couple of weeks ago they were able to reposition themselves to sell in the city, although sales have not risen to bring something home.

I also assure that while they limit the spaces to market their products with the Bacalar seal, to the street vendors from Chiapas, they let them sell at their discretion products that are neither made by hand, nor much less representative of Bacalar.