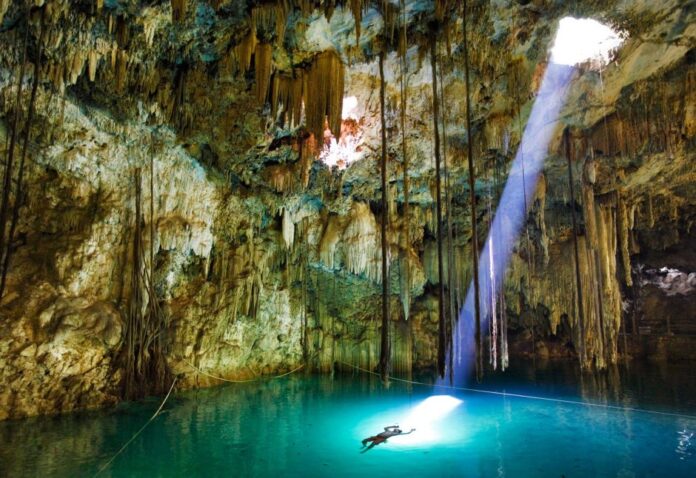 The cenotes of Xkekén and Samulá have become two of the most popular cenotes in the Yucatan Peninsula, so tourists from all corners of the world come to these sites attracted by their beauty and crystal clear waters.

The ecotourism resort of Xkekén has been placed this year among the most visited leisure and recreation sites in the state, because it is possible to access two of the most beautiful cenotes in the Yucatan Peninsula, the Dzinup -or Xkekén- and the Samulá.

The site is located a few kilometers west of the colonial city of Valladolid, one of the two Magical Towns of the state, and about 160 kilometers east of the state capital.

The Dzitnup cenote is also known as “The Blue Cave”, because the sun passes through a small natural entrance in the upper part of the woods, which generates a beam of light that illuminates the interior vault and creates a fantastic image with the reflection of the water.

Its entrance is narrow and through a stairway carved in rock, from where the calm waters are at times seen in an intense turquoise blue.

This amazing cenote is also known as Xkekén, which in Mayan means “little pig” or “piggy”. The story goes that a farmer was looking for his little pig, when he found the cenote.

The Samulá cenote is located right in front of Xkekén, so visitors just have to walk along the botanical gardens that have been installed on the site to access the entrance of this marvelous cenote.

It is also an underground cavern with blue crystalline waters illuminated through a hole in the upper part.

In both bodies of water it is possible to see fish, some of them considered endemic, so that visitors can carry out observations, snorkel and have a direct approach with nature.

The beauty and popularity of these two natural attractions have brought 154,393 visitors between January 1 to August 23. We’re talking about people of all nationalities that came to admire these natural wonders. This figure has placed this tourist site among the most visited of the year in the state of Yucatan, according to information provided by the Board of Cultural and Tourist Services Unit (Cultur).

These two cenotes had become an unforgettable experience for those looking for this type of natural attractions, and they obviously are also linked the Maya culture, as these sites keep the secrets and legends of this great anciente civilization.