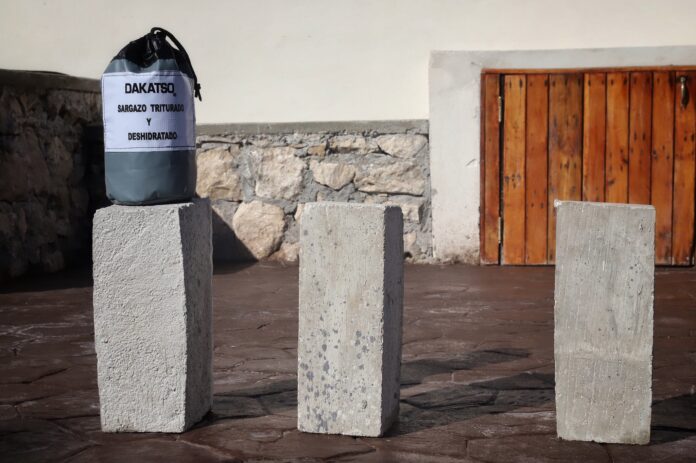 It can be used to build roads with light traffic, sidewalks, among others

Although there is not much research regarding its use, sargassum is a new raw material that nature has provided us and that can be used at an industrial level, said Dagoberto Ruiz Lavín, director of Grupo Dakatso, when unveiling a new way of taking advantage of the alga.

He said that for years they were given the task of finding ways to industrialize the algae, which for most is seen as waste or waste. For sargacreto, the sargassum is harvested in the high seas: “the one that works for us is the live one, it is washed, the salinity is removed with biodegradable chemicals, we crush it and we go to dehydration using UV rays”.

This dehydrated sargassum is mixed with concrete in a concentration of 35 to 40 percent. The patent for this procedure is pending and the resulting material can be used to build roads with light traffic (such as hydraulic concrete or paving stones), sidewalks, blocks, joists, vaults, patterned floors, and perimeter fences. The material can also be used for public parks (benches, games, and green areas).

“This does not generate leachate into the environment, as opposed to when the algae is sent to a landfill, where it becomes a source of contamination of the water table, reaches the sea again, and causes damage to the reef,” he said. The project will evolve and they hope to continue producing on a large scale.

The sargacreto project will go through an environmental audit process to obtain the certificate of responsible production, so the company will validate the entire production process, review what type of raw material and ingredients were used, that the machinery and infrastructure are ecological, and how much waste it generates or if it produces greenhouse gases.

The sargacreto will also serve to create artificial reefs: “we have documented that these pieces in saltwater regenerate the reef, the algae they contain allow marine life to grow.” Ruiz Lavín said that they are working together with a German company to install an industrialization plant in Playa del Carmen, with which they will process sargassum and when the seaweed is not in season, they will do so with PET.

Regarding possible participation in the Mayan Train project, the interviewee recalled that for two years as part of the Puerto Morelos Protocol it had been planned to make sleepers and stations with sargacreto, for which he hopes that his proposal to use this material in the federal megaproject.

“All the sargassum that has arrived can be implemented in some phase of the project: stations, waiting areas, benches, and I think it would be very positive because apart from that we would generate employment for the locals,” he said.

He explained that the crusher they use, manufactured in China, reduces the volume of treated biomass to 10 percent, which can also serve as fertilizer for the green areas of the hotels.