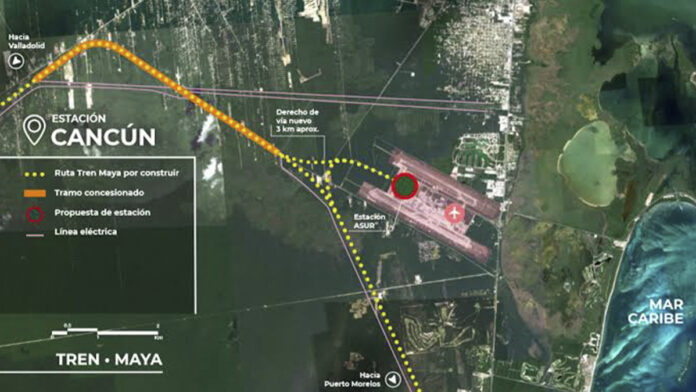 The cost of the Northern Section 5 of the Mayan Train, which will run on a 48-kilometer second floor at a height of 9 meters on the Cancun-Playa del Carmen highway, will be approximately 30,000 million pesos.

This was confirmed by Rogelio Jiménez Pons, director of the National Tourism Promotion Fund (Fonatur), who previously commented that the cost would rise compared to what was budgeted by the 10 consortia that participated in the tender for this section, which was canceled to deliver the work to the Army.

In said tender canceled on March 4, the group made up of ICA, Mota Engil México and Impulsora de Desarrollo Integral presented the lowest economic proposal for 10,349.4 million pesos, while the consortium formed by Operadora CICSA, La Peninsular Compañía Constructora and FCC Construcción delivered the highest amount, for 18,557.9 million.

All the proposals proposed running the train level with the floor to the center of the Cancun-Playa del Carmen highway, in addition, the work included the construction of 18 vehicular crossings, a railway viaduct in Puerto Morelos, and the supply, installation, configuration and tests of the Flexible catenary system for the train to run at 160 km / h.

On the other hand, the plan that the Army will execute means that the cost of the elevated section will increase 200% with respect to the cheapest proposal presented in the canceled tender; However, this option will minimize the effects on vehicular traffic, said Jiménez Pons during the starting flag for Section 5 North in Cancun.

“Yes the cost rises, but not so much because the Army is going to do it and they have a lot of experience in the efficient management of resources,” he said.

He indicated that “the hoteliers expressed great concern about the effects on mobility that a conventional work could generate at ground level; then, the possibility was raised that a construction group that has demonstrated efficiency beyond all else, which is the Army, with good prices and with greater flexibility and efficiency, could enter to generate different conditions ”.

During the banner of the start of works on March 5 in Cancun, the President of the Republic, Andrés Manuel López Obrador, said that the second floor through which the train will run will allow to appreciate the beauties of the region, in addition, there will be no affectation because the road will run on columns, beams, and prefabricated post.

This constructive solution aims to reduce the effects on vehicular traffic on the Cancun-Playa del Carmen highway. The electrified double track will be supported by a 9 to 10-meter high concrete structure based on columns, capitals, and trough-type double beams; Freight and passenger trains will run over it with speeds of 100 and 160 kilometers per hour, the construction of which will take two years.

According to the Federation, raising the double track will also reduce noise and vibration levels from the electromotive system and the replacement of sleepers and ballast.