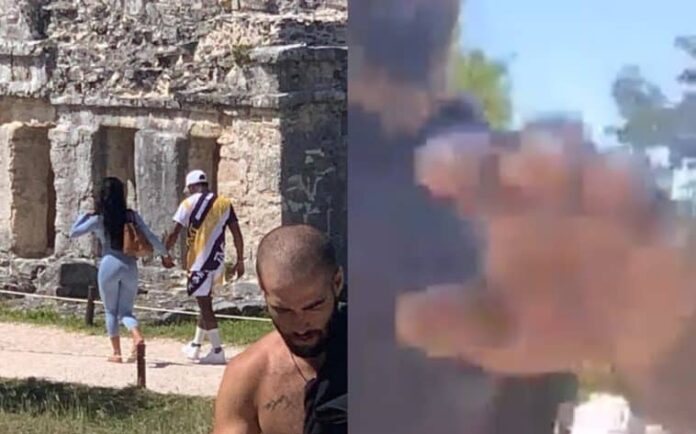 He arrived in his private jet

Money lived up to his nickname since he arrived in Cancun on Wednesday and did so aboard his luxurious jet, which is personalized and that looks in gigantic “Mayweather”, screen-printed on the sides and the TMT (The Money Team) logo, which is his company.

As expected, Floyd Mayweather’s visit to Mexican beaches caught the attention of many tourists in Cancun, including a curious person who dared to take out his cell phone to take photos, which caused one of his bodyguards to stop him.

The legendary boxer was walking quietly with family and friends, as well as with several escorts that surrounded him, which attracted the attention of many present, while Mayweather went to the Garza Blanca Resort & Spa Cancun hotel , from TAFER Hotels & Resorts.

Floyd Mayweather is in Mexico. The American boxer is in the Riviera Maya taking a few days of vacation, even on his social networks he has shared a little of how well he has had in the Caribbean

And it all happened when “Money” visited the archaeological zone of Tulum on Thursday, where some Mexicans tried to film him with his cell phone, a situation that his bodyguards tried to avoid, which upset the nationals, who began to shout at the top of their lungs: “Arriba Canelo. ”

The bodyguard caused the discontent of more than one Mexican by preventing the fan from capturing an image of the boxer, which triggered those present to remind him that he was in Mexican territory.

Among the shouts there was the classic “Canelo, Canelo”, however Floyd and his team did not seem to mind.

Mayweather ignored the screams and followed the pace with his companions , until entering the archaeological ruins