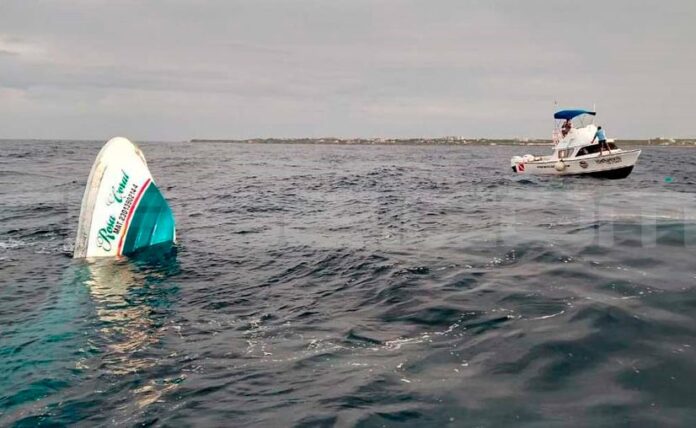 Emergency elements manage to rescue 15 of the passengers; among the disappeared, there is a minor.

Tragedy during the summer vacations in Quintana Roo: One person dead, 15 people rescued and two more missing, including a child under 5 years of age; It is the preliminary balance of the overturning of a tourist boat in front of Isla Mujeres.

The Harbor Master’s Office received a report of a boat with tourists that capsized in the open sea, according to the first reports.

Witnesses reported to the authorities that they saw the boat “Rosa Coral” turn over and the passengers desperately asking for help. Boat with tourists capsizes off Isla Mujeres: there is one dead and two missing.

The events occurred at the height of Punta Sur in Isla Mujeres, when the boat had a fault in the engine, being left adrift and at the mercy of the current that ended up overturning it.

The preliminary balance of this incident is 15 people rescued alive by emergency items sent by the Captaincy of the Port of Isla Mujeres; one more managed to reach the coast but died minutes later. Boat with tourists capsizes off Isla Mujeres: there is one dead and two missings.

Meanwhile, elements of the Secretary of the Navy are looking for two people on the high seas: a 41-year-old man, and a minor just 5 years old.

One of the people detailed in an interview that none of the crew members were wearing the life-saving vest.

A boat that had the name “Rosa Coral”, with 15 people on board, among the inhabitants of Isla Mujeres and their relatives from Yucatán, sank on Tuesday near Punta Sur, leaving three dead; a man, a woman and a child.

The accident occurred at 6:16 in the afternoon, when the boat with registration MAT 230139 0214-4 sank while en route to Isla Mujeres.

“The waves became aggressive, they began to hit the boat, water entered the boat and it began to sink, immediately Noe Antonio” N “, captain of the boat, jumped into the sea and went swimming towards the shore to ask for help” said Cintia ‘N, the captain’s sister.

Before the event, cooperatives of fishermen and marinas sent boats to help the passengers.

According to the Navy, there were 15 members on the boat, of which the Navy rescued 11 alive and two without vital signs; one more person swam to shore and a body was later recovered by civilian personnel aboard a smaller vessel.

The lifeless bodies were identified as Adriana ‘N’, the captain’s ex-wife; Reynado ‘N’, his cousin; and the 5-year-old boy, his nephew.

The boat was manned by a family from Acancéh, a town in Yucatán, who resides on the island. Because they have a sailor’s book, they borrowed the boat from the owner, both belonging to the cooperative “A perfect day”, which provides Tourist trips.

The family had fun during the visitor’s tour and at Playa Tiburon they finished their tour, with a meal, but motivated by wanting to see the turtles floating in the sea, which is typical in this season, they went out again.

When crossing Punta Sur, where two sea currents meet, a wave reached them and the water began to enter the boat, in addition to the fact that the sea was choppy by the rain and the storm did not help the boat.