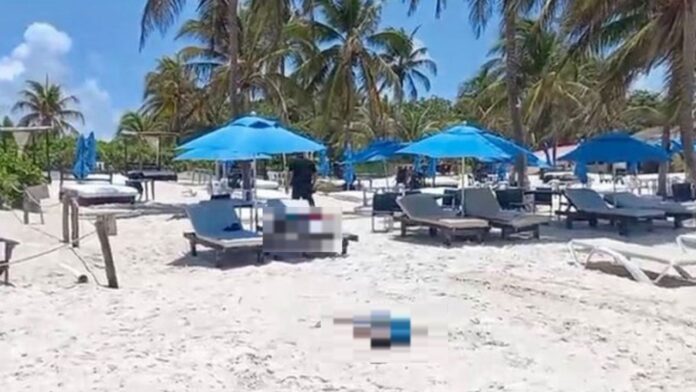 Hitmen fired at two of the victims; one died on the spot and another was wounded in the sleeping area, but did not survive; the third victim tried to flee and hide in a hotel but was hit and killed

An armed attack recorded today, on the beaches of Tulum, left three dead. A couple of hours later, one more person was murdered in an irregular settlement in the same municipality.

The events were reported at 12:30 p.m. and arose in Playa Paraíso, where a lodging center is located within the Protected Natural Area polygon of the Tulum National Park, almost a kilometer away from the iconic archaeological zone.

Unknown persons fired at two of the victims; one died at the time, in the middle of the beach; and another was wounded in the sleeping area, but did not survive.

A third attempted to flee and hide in a hotel, located on an adjoining beach, but was hit and killed, the Tulum City Council confirmed.

Elements of Public Security of Quintana Roo, personnel from the Directorate of Civil Protection and the State Attorney General’s Office (FGE), arrived at the site. The area was cordoned off.

Almost 2 p.m., municipal authorities reported the murder of one more person, but in an invaded area baptized as October 2, adjacent to the sumptuous resort Aldea Zamá and considered the largest irregular colony in the town.

Witnesses chose to take shelter and the assassins took the opportunity to escape from the scene of the crime and although elements of the State Police and National Guard arrived at the scene, they could not find the alleged perpetrators