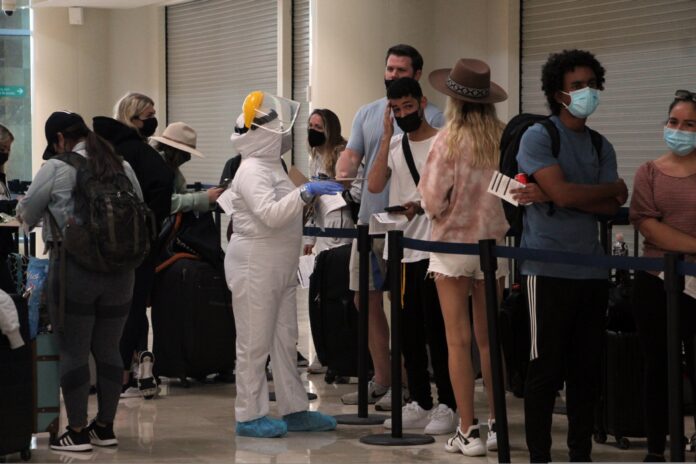 The scandal over the students who returned to Argentina from their graduate trip abroad with coronavirus, unleashed last weekend, adds a new chapter. Another contingent of 50 students returned with 30 infected with Covid.

There would already be four schools in that town where there are cases of students returning to the country infected with coronavirus. The Nation contacted the four institutions that refused to give details. A legislator in the area confirmed to this media that the cases among students in that district are multiplying, although there were no cases of non-compliance in the isolation when arriving in the country.

According to the information published by the Pilar a Diario portal , the new contingent, as in previous cases, the tests carried out in Mexico would have been negative. However, upon arrival in Argentina, in the controls carried out at the Ezeiza airport, more than half of the contingent of the school located in Del Viso tested positive.

Last Saturday, students from two other schools in Pilar tested positive for coronavirus also when they returned from their graduate trip to Cancun. It is about at least 12 of the 99 infected – out of a total contingent of 129 – who put the alert to the Ministries of Health of the Nation, the province of Buenos Aires, and CABA.

According to Pilar quoted Diario, the young people from Pilare who tested positive attend Saint John’s and North Hills schools, which join the students of other establishments in the Buenos Aires neighborhood of Belgrano. Two more schools registered cases in the last hours.

One of the infected who arrived in the country last weekend is the son of the Porteño deputy chief of government, Diego Santilli, and the journalist Nancy Pazos. The minor had already had coronavirus in August, so he became the first person from Pilare to be infected again.

As reported by Nancy Pazos herself, her son began with symptoms while he was in Mexico, but he tested negative in the test they did before boarding the plane that would bring him back to Argentina. However, upon arriving in Ezeiza a few hours later, they tested it again, this time with a positive result.

The students belong to the city of Buenos Aires and the protocols were activated when, upon returning from Cancun, the young people tested positive for the antigen control that was carried out at the Ezeiza International Airport. The delegation was made up of 149 people, of which 99 contracted the disease, according to the data processed by the Buenos Aires Health portfolio that sent the alert.

The Argentine government took advantage of this situation to discourage travel abroad for non-essential reasons, in line with the reduction in flights from Europe and countries in the region. When confirming the results, different actions were arranged.

From this case, the National Directorate of Migration carries out a strict monitoring of the infected young people and their close contacts so that they comply with the mandatory quarantine. At the same time, controls were strengthened at the Ezeiza international airport and the airlines that transport contingents of graduates were notified for a more exhaustive verification of the tests presented before undertaking the return to the South American country.

The trips of students who finish studying the last year of the secondary cycle are a tradition in Argentina. Most move to the interior of the country, but trips abroad are also common. These contingents were affected during the strict quarantine that was imposed in March 2020, but they resumed at the end of last year after sanitary measures were made more flexible.

Between the slow vaccination and the latent threat of the coronavirus variants, the government of Alberto Fernández analyzed this Monday to restrict travel abroad to a minimum and even close the borders.

“There is neither a measure nor an area responsible for saying: the virus will not enter. So we have to discourage the situation ”, admitted the Minister of Health, Carla Vizzotti, in dialogue with journalists. “We have to put on the table the situation that exists at the global and regional level and the issue of variants. It is important for emotional health to take a break, but the truth is that there is something that exceeds us in the world ”.