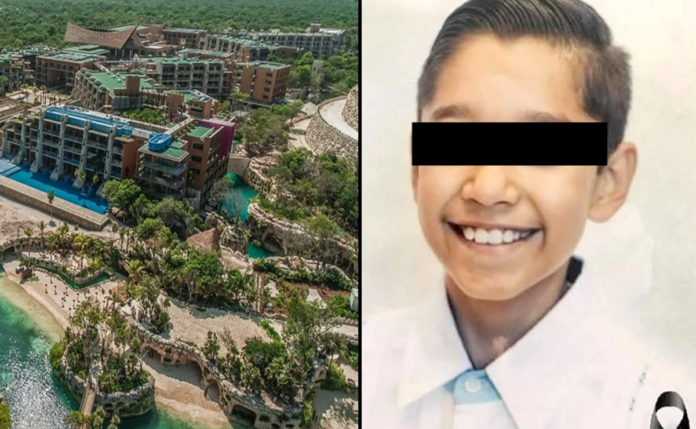 The Xcaret Group, owner of the Xenses park, where a “human error” -they forgot to close the filtration system grille- caused the death of Leonardo, a boy who was 13 years old, at most he will pay a fine of 150 thousand pesos, which is the highest fine that Civil Protection can apply in the municipality of Solidaridad, revealed its director, Francisco Poot.

The municipal official explained that the sanction is imposed because the park staff did not activate the prevention protocols, even notified them of the accident until March 31, that is, four days after it was registered.

Francisco Poot explained that the prevention and safety mechanism that Xenses theme park staff must implement indicates that when there is an accident as the first respondent they have to activate protocols, provide first aid, apply Cardio Pulmonary Resuscitation (CPR) measures and call the number emergency 911.

However, as a municipal authority they never had any report and therefore could not go to the scene of the accident.

The official said that representatives of the Xenses theme park argued that they activated the security protocols and that the minor left the park alive, but Civil Protection does not know if the security brigades that must be activated were complied with, as he was warned several days after the accident.

He affirmed that the same Xenses staff reiterated that it was a human error because by providing unauthorized maintenance to the area, they left open a grid, which is where the child was sucked into.

Francisco Poot assured that when Civil Protection arrived at the park, it suspended the area where the accident was registered, but it will be the State Attorney General’s Office (FGE) that will carry out the pertinent investigations and determine if it will reopen to the public, as well as the dates.

From Civil Protection, he insisted, they will apply the maximum sanction allowed in the law, which is equivalent to about 150 thousand pesos, approximately.

In recent days we reported that the deputy prosecutor of Quintana Roo, José Carlos Villarreal Rosillo, threatened the cardiologist Miguel Ángel Luna Calvo, who lives in Durango, with not giving him the body of his son Leonardo, who died after he was sucked into the filtration system of one of the artificial rivers of the Xenses theme park – owned by the Xcaret group – if he did not sign a pardon for the establishment, this according to the doctor’s testimony.

Even the lawyer of the father of the minor, Mónica Gómez, denounced that at the beginning of the FGE staff, she integrated the investigation folder for the crime of threats, instead of wrongful death, as it was at the end, which was totally absurd and far from reality.

Therefore, the FGE reported that on Thursday, April 1, it initiated a complaint file against public servants of the social representation attached to the municipality of Solidaridad, following the accusations of the cardiologist Miguel Ángel Luna in relation to possible irregularities in the performance during the initiation and integration of an investigation folder for the possible commission of the crime of wrongful death, for events that occurred to the detriment of a minor who “probably” lost his life in a theme park located in this municipality.

The direction of supervision, evaluation, and control of the performance of public servants initiated a complaint against those who are responsible, which will also be sent to the Internal Control Body to strengthen the investigations and define the administrative or legal sanctions that derive from it. .

They ask for #JusticiaParaLeo, a child from Durango who died in Xcaret

The events occurred last Saturday, March 27, after the family moved to Cancun to celebrate that everyone had overcome the Covid and were healthy

The Change.org platform asks for #JusticiaParaLeo, the 13-year-old from Durango who died in the well-known Xenses water park in Cancun; after being sucked by the water filtration system that was uncovered.

The events that occurred last Saturday, March 27, became relevant at the national level after local media in Playa del Carmen questioned the actions of both the administrators of the park belonging to the Xcaret Group, as well as the State Attorney General’s Office by not closing the place.

Leo is the son of the renowned cardiologist Miguel Luna Calvo, who along with his family traveled to said tourist destination after having defeated Covid-19 to celebrate his recovery, however, the tragedy reached them in the midst of the happiness that caused them to be survivors of the virus that plagues the whole world.

Therefore, the Luna Guerrero couple today demands justice for the death of their son who they warn that even after the incident, adequate medical attention was not provided and it was the father himself who managed to keep the child alive, after carrying out maneuvers of resuscitation, despite this on Sunday March 28 the child lost his life.

For its part, the Xenses park through its official website issued a statement in which, in addition to regretting the death of the minor, points out that in more than 30 years, no such event had occurred, “It is important to highlight that from the moment After the accident, the area was secured and specific measures have been taken, such as the permanent presence of a lifeguard ”.

After learning what happened, figures from Durango politics and society made their condolences public through social networks, one of them was the governor of Durango, José Aispuro Torres, who on his Facebook account posted an image with the following message: “I join the grief that Dr. Miguel Luna, his wife Hilda Guerrero, and their entire family are grieved at the sensitive death of their beloved son, Leonardo Luna Guerrero. I send my sincere condolences, hoping you find strength and comfort in the face of this irreparable loss. Rest in peace”.

Currently, the well-known digital activism platform Change.org, has already accumulated more than 27 thousand signatures and the number is increasing. While from Durango, the family is already planning a lawsuit against this company because they not only seek justice for what happened, but also that more children go through this situation again.

At a press conference, the Secretary-General of the Government, Héctor Flores Ávalos, reported that in the face of the allegations of alleged pressure received against the family by the administrators of the Xenses park in order for them to sign their withdrawal and deliver the body of his son to bring him to the Durango capital, the Durango government will contact the Quintana Roo authorities in order to find out what happened.

“We want to know under what conditions that human error that the company comments were generated and what are the proof measures that they have to prove that,” said the state official, who pointed out that another point has to do with the repair actions of the damage, fundamentally so that a situation of this type does not reoccur and with the lawsuit filed by the family against the company that manages the park.

The family has its own lawyers, who are already handling the case, so the support that the State Government can provide is merely an accompaniment in this fight they are making to clarify responsibilities.

“They have the support of the State Government to be the immediate communication with the Government of Quintana Roo, so that the work of their lawyers has an effective result. Be careful, it is not intended at all to ask for any favor, here the question is that one act in accordance with the Law, that the investigation be carried out in the terms that must be given and that there is an absolute and full clarification of the facts, ”informed Héctor Flores.

I signed a pardon to Xcaret to recover my son’s body; vice prosecutor put pressure on me: Leo’s father

Leo’s father, Miguel Luna, accused Deputy Prosecutor José Carlos Villarreal of pressuring him to sign the pardon to Grupo Xcaret and thus be given the body of his son, who died sucked by a filter of the water system in the park. Xenses.

In an interview for Radio Fórmula, Luna revealed that in her son’s case there was corruption on the part of the State Attorney General’s Office (FGE) of Quintana Roo.

In the same way, the body of the minor has already been delivered and the investigation is still in process, according to the attorney general Óscar Montes de Oca.

“We will continue to carry out the corresponding investigation acts to determine or not the responsibility of these people.”