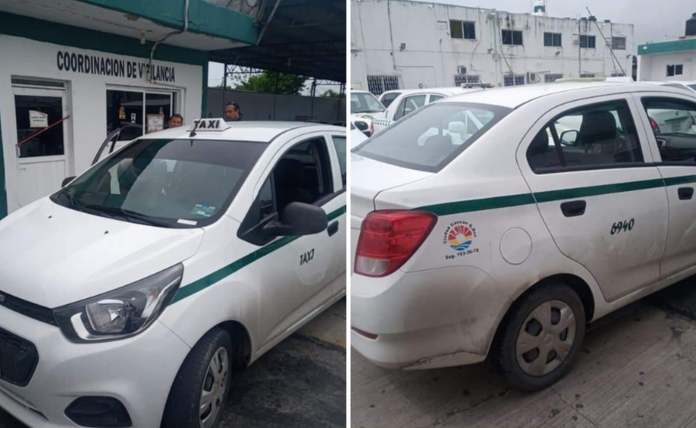 They are robbing tourists

CANCUN QUINTANA ROO. On Tuesday June 15, my boyfriend and I boarded a taxi in the palapas park in the center of Cancun. When we got on there were 2 guys who were ahead, the taxi driver told us that he would take the “passenger” close by and then us.

When we got in he started driving like crazy and in less than 2 minutes we were already 2 blocks behind Chedraui de Av Tulum.

The driver got out, assaulting my boyfriend while the copilot pointed a gun at me.

To cut a long story short, they insulted us and when they saw that we resisted, they hit Cody with a knife 4 times, leaving him very injured. Fortunately, he never let them touch me.

They took everything from us and left us.

We arrived at the Red Cross where we were waiting to be treated when another patrol arrived with 3 tourists full of blood.

What do you think? 2 taxi drivers with the same characteristics had assaulted and injured them. The floor of the Red Cross was drenched in blood

We were able to find the taxi driver and his car the next day, we went to identify him and the taxi was the same and it still had traces of blood on one of the handles.

The car had no theft report. The one who assaulted us was a common taxi driver who drove every day.
The taxi driver was there and they do not know the helplessness and fucking courage of seeing him in front of me while he took his finger out of the way and he only made fun of it. Logical is untouchable. He is a taxi driver in Cancun.

And you will say ok. He is already in jail. Well no. Because Magic Cancun!

The young woman recounted how she was prevented from calling the authorities despite having her assailant in front of her.

An alleged assailant camouflaged as a taxi driver in Cancun is free and mocking a tourist, his latest victim.

The young woman who reported yesterday a violent assault in the taxi 6940 of this tourist pole, shared exclusively for Novedades the details of this event that probably involves the Union of Taxi Drivers Andrés Quintana Roo and corrupt policemen of Cancun.

The scene is a mockery for Cancun citizens and the hundreds of visitors who are returning to the beaches of this destination after confinement.

The victim was summoned to collaborate in the investigations to find the identity of the criminal driver, but the call was only a smoke screen to simulate empathy of the union and the authorities of Quintana Roo.

At all times, he adds, authorities “protected” the person who assaulted them in the vicinity of the Palapas Park on June 15.

“We recognized him and he made fun of US because we couldn’t do anything to him. We asked to call the police and they wouldn’t let us. They told us that we couldn’t do that, that if we called the police they weren’t going to help us.”

After the recognition of the subject and the vehicle, the young tourist and her partner were taken to the Public Prosecutor’s Office to make the corresponding demand. But what happened there is a faithful portrait of the ordeal that women and visitors live daily in Cancun when they are attacked by crime.

The victim’s version contrasts with that of the Union, which today published its version of events.

According to the union of flywheel workers, the accused obeys the initials E.O.H.P. and was suspended from his work while his legal situation is resolved.

In a statement, the organization specified that the car used to carry out the crimes is “detained” in the courtyards of the “Andrés Q. Roo” Union.

The undersecretary of Labor, Celso Góngora Manrique, stressed that all citizen complaints are dealt with in a timely manner, from a charge outside the official rate, to improper treatment by the operator and especially when criminal acts are reported.

However, the tourist does not believe in this version, as the alleged criminal has been receiving protection from the authorities and taxi union.