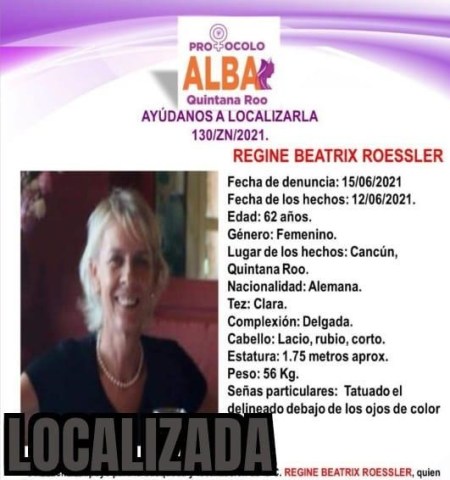 CANCÚN, Quintana Roo.- The lifeless body of a German woman was found floating in the sea, near Cabo Catoche, about a month and a half after she was reported missing in Isla Mujeres.

Regine Beatrix Roessler left her home in Isla Mujeres on June 12, supposedly to go shopping in Cancun, but she was not seen again.

The roommate of this foreigner reported the case to the State Attorney General’s Office, which issued a certificate of the Alba Protocol, with code 130 / ZN / 2021, which was deactivated today, when the legend of “Located” was placed in letters black, indicative that he was found lifeless.

Apparently, the body of the victim was discovered by fishermen in the Cabo Catoche area 10 days ago, but it was until today that it was confirmed that it was Regine Beatrix, 42 days after her disappearance.

The State Attorney General’s Office has reported the official identification of a female body found floating in the sea 10 days ago.

It has taken more than a week for officials to positively identify the body, which was located in the sea near Cabo Catoche.

State officials say the female body has been positively identified as 62-year-old Regine Beatrix Roessler, a German woman who lived on Isla Mujeres.