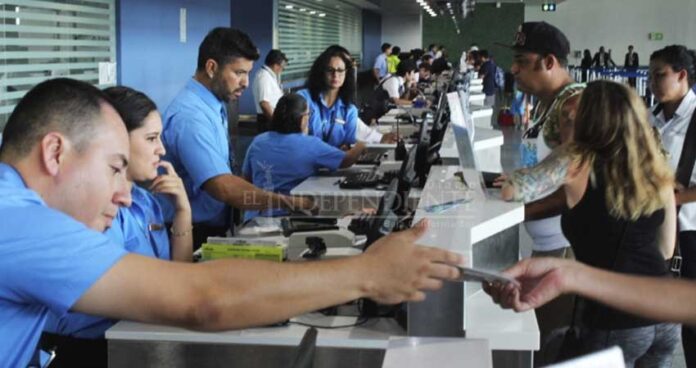 Agents cannot cope in the modules of the Cancun International Airport

The National Migration Institute (INM) continues with a deficit of 100 agents in the modules of the Cancun International Airport, where there is no supply, despite the fact that there is currently a low influx of international travelers, this being an outdated request.

Roberto Cintrón Gómez, president of the Cancun, Puerto Morelos, and Isla Mujeres Hotel Association, mentioned that they held a meeting with the Migration and Tourism authorities, where more staff were requested for the stations, in order to facilitate the entry of foreigners to the country, but not only by migration but also by customs.

” A point of agreement was signed to increase the number of collaborators who are supporting, according to the information there are 27 new agents who have already arrived, and although this allows time to decrease, there is a lack of more personnel,” he mentioned.

According to the information provided to the hoteliers, it is that they only had 17 people to attend the modules in the terminals, and although for now, 50% of the international routes are arriving, it is necessary to end the bottleneck that is generated in the place.

The point of agreement is for Cancun, Los Cabos, and Mexico City, which are the main recipients of international tourism. The foregoing occurs while the law modifications are being made to operate the electronic modules that would make the entry of visitors easier.

However, in recent days immigration personnel working at the Cancun International Airport denounced that the head of the INM in Quintana Roo, Yadira de los Santos Robledo, is forcing them to work double shifts, which is to serve at least 18 hours continuous for the attention of the arrival of visitors.

According to Aeropuertos del Sureste , an average of 115 international routes arrive daily , with an average per flight of at least 100 passengers, who must go through immigration and customs before entering the country.