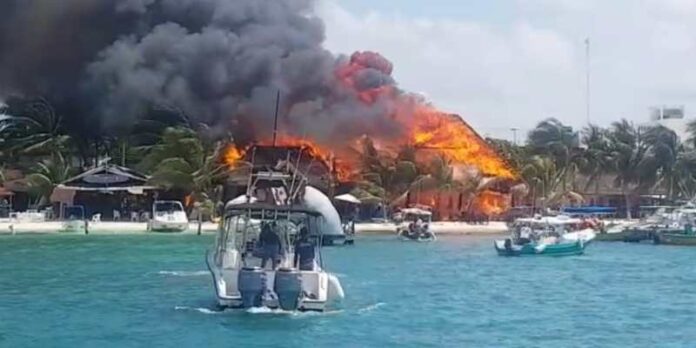 A fire that apparently originated in the kitchen of the Mocambo restaurant, located on Rueda Medina avenue, the most important in Isla Mujeres, Quintana Roo, destroyed the aforementioned establishment and seven more, as well as a golf cart, reported the director of civil protection of the island, Merced Ortiz May.

The municipal official reported that yesterday at 11:03 a.m. he received a report of a conflagration in the aforementioned restaurant, but when elements in his charge arrived at the site, 12 minutes later, the fire had already spread to other businesses.

He pointed out that an attention protocol was immediately activated to which civil protection elements, personnel from the Aguakán drinking water concessionaire and from the Ultramar company -the operator of ferries that connect Isla Mujeres and Cozumel with the mainland-, members of the Secretariat of the Navy, residents and even tourists who threw buckets of seawater into the flames, which reached 40 meters from a gas station.

The fire that started in the Mocambo spread to the Miramar, Picus and Luna Gris restaurants, a jewelry store, two clothing stores, a handicraft store and a parked golf cart.

The office manager of the municipal presidency, Juan Román Martín Pérez, came to supervise the work, as Mayor Juan Carrillo Soberanis requested a license to compete for a federal deputation in June, nominated by the Green Ecologist Party of Mexico.

Merced Ortiz said that the incident was controlled at 2:30 p.m., after destroying the aforementioned businesses. Circulation on Rueda Medina Avenue was closed for the duration of the emergency and was restored once the removal of debris began and the Federal Electricity Commission completed the work to restore power service in the area.

Risk of explosion in gas company

He commented that civil protection from Isla Mujeres responded to a call from the Zeta Gas company, a fuel distributor located near Mocambo, because the high temperatures that caused the fire caused their fuel tanks to heat up, so they had to be poured water to cool them down and prevent other accidents.

The head of civil protection announced that experts from the State Attorney General’s Office will carry out investigations to know precisely the cause of the conflagration, which supposedly began with a defective Mocambo fryer, as well as the amount of the losses.

Ortiz May affirmed that a burning of such magnitude as the one that happened this Monday had never occurred, but the personnel under his charge have sufficient training and equipment to deal with similar eventualities. He stressed that his subordinates have the support of elements of the Navy, Aguakán and, on this occasion, the Ultramar shipping company, which put at their service a boat equipped with fire-fighting devices.

The wind that spread the flames was not enough to dispel the smell of smoke that permeated all of Isla Mujeres, where the damaged area was reduced to structures and burned palm trees.