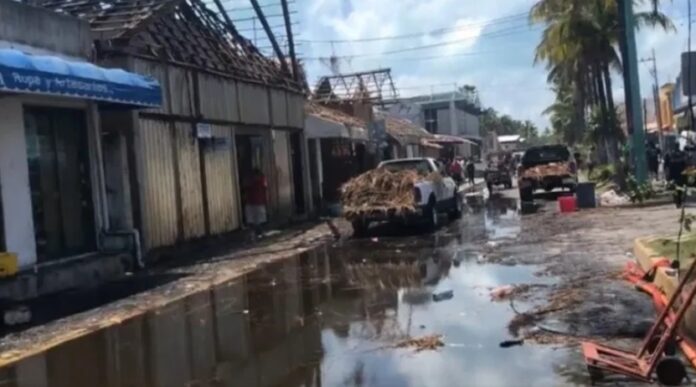 Isla Mujeres, Q.R. — Island agencies and local business owners have begun the grim task of sifting through what remains after a massive blaze ripped through a section of the town’s seafront locale. Personnel from the island fire department and Civil Protection continue to work a cleanup phase after the devastating fire that claimed at least six businesses and damaged another four.

On Monday morning, a fire that began in a restaurant quickly spread to neighboring businesses. At least six were completely reduced to ash with at least four more being destroyed by water damage in the extinguishing process.

Civil Protection and firefighters spent more than three hours battling flames Monday. Personnel from both agencies remained on site for most of the day, reappearing again Tuesday to begin an assessment of the damage.

The entire block of shops remains cordoned off by authorities as elements of the Prosecutor’s Office arrive to complete their investigation.

Rubén Borau García, representative of the Mexican Association of Professionals in Risk Management and Civil Protection (Coordinador de Asesores en Asociacion de profesionales en Proteccion Civil de la Republica Mexica) has said that the extent of the fire highlights the lack of sensitivity of authorities, noting that the island should be able to count on a more equipped and prepared firefighting team to deal with this type of accident.

State Civil Protection has launched an official investigation to determine the exact cause of the fire, which according to municipal Civil Protection director Merced Ortiz Maya, was started by a restaurant fat fryer. Business owners continue to wait for the Prosecutor’s Office to finish so they can begin their recoveries.

Mocambo, Miramar, La Luna, El Picus, Artesanías Huchim, Artesanías Sandy and Muelle 7 are some of the businesses known to have been affected. An official count from authorities has not yet been released.