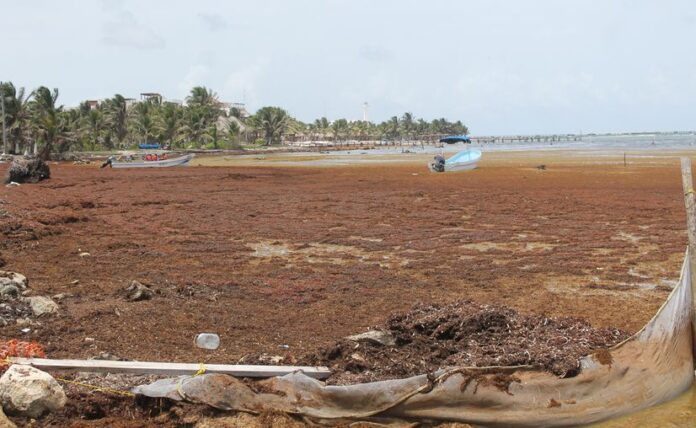 Faced with this situation, they activate the traffic light to know the impact that the seaweed recall will have.

Starting this weekend, the implementation of the traffic light to measure and report on the amount of sargassum that lands on the beaches of the Mexican Caribbean began, which will be updated daily.

The strategy includes the monitoring of 47 beaches of interest along the entire coastline, from Holbox to Xcalak.

According to the data, in Tulum, Mahahual and Xcalak there is no beach free of sargassum, while in Cozumel it also has high concentrations. Isla Mujeres is the only municipality with moderate and low amounts.

The forecast indicates that sargassum will continue to reach the coasts of Quintana Roo in the coming days.

“Considering the trajectories through the current models, three groups of sargassum are delimited with the highest probability of causing landfalls on the coast,” he indicates.

The first concentration of sargassum is located 22 kilometers southeast of Tulum. It will continue its entry into the Cozumel canal in the next five days, being able to increase the calls to the south and east of the island, as well as in the vicinity of Tulum, Playa del Carmen, Puerto Aventuras and Punta Maroma.

The second group of sargassum is located 42 kilometers southeast of Punta Herrero, and it is expected that in the next three days it will approach the Cozumel channel, with landfalls on the coasts of Mahahual and Sian Ka’an.

The third group, and the one with the highest proportion, is located 45 kilometers southeast of Mahahual, with high probabilities of landing on the entire Mayan coast.

The information provided in the bulletin of the Secretary of the Navy is fed by the reports of each one of the coastal municipalities.

Since March the municipalities, with the help of brigade members and machinery, have collected 14,015 tons of seaweed, while the Navy has collected 575 tons at sea, in the same period.

The University of South Florida expects sargassum to continue to reach Caribbean beaches in massive numbers for at least the next two months.