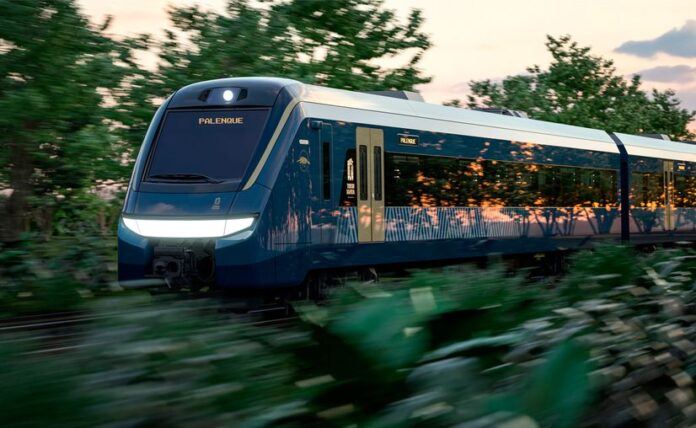 The National Fund for the Promotion of Tourism (Fonatur) presented the design and recreation that the wagons of the Mayan Train will have, whose route will travel 1,500 kilometers in the southeast of Mexico.

Rogelio Jiménez Pons, director of Fonatur, indicated that Bombardier and Alstom will be the companies in charge of manufacturing 42 passenger trains.

According to Fonatur, this model of Alstom train service is used as suburban and regional transport in places like Melbourne, Australia; Paris France, Catalonia Spain, and Santiago in Chile.

On Friday, Fonatur head Rogelio Jiménez Pons presented the results of the tender for rolling stock and rail systems of the Maya Train project. During his presentation, he explained that the project will consist of three different trains with designs inspired by the traditions of the Yucatan Peninsula, roots of the region, and Mayan names.

Xiinbal will offer regular passenger service, connecting people to the southeast in comfort. Xiinbal will be outfitted with a digital environment with WiFi and plugs in each seat. It will offer seats with a headrest and footrest as well as a folding table and a Cafeteria Car with a meeting space.

Janal (Eating), is the restaurant service train inspired by aquatic landscapes and the work of Mexican architect, Luis Barragán. This train will have a four-person seating configuration to allow friends and family members to gather around a dining table.

And P’atal (Stay) or Long Distance Service will allow passengers to travel in reclining seats with panoramic views or sleeping cabins outfitted with private showers. Jiménez Pons says these cars will offer the same level as that of a hotel room.

During his presentation, Jiménez Pons added that there will be space for suitcases and a bicycle for those who need it. It is expected that during the first years of operation, which will start in 2023, there will be departures from Cancun every 15 minutes.

After winning the tender, Bombardier Transportation México S.A. de C.V will be responsible for the construction of the 42 cars that are to be produced at the Ciudad Sahagún, Hidalgo plant which will create hundreds of local jobs.