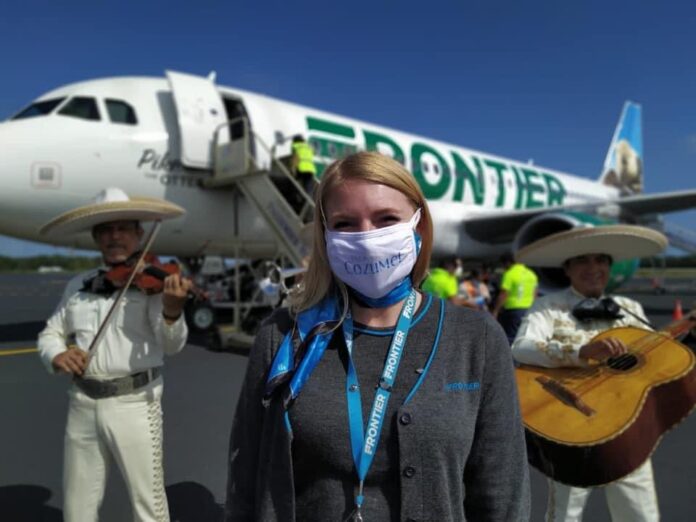 This weekend Frontier landed in Cozumel from Chicago, to increase international arrivals on the island, increasing confidence that it will soon be able to return to normality, this same week it was confirmed that the first cruise will return in June.

This is the second weekly frequency that the US airline has after it opened the Denver-Cozumel route on February 13, which represented its return to the island after six years.

The Frontier flight that arrived with 14 passengers who were greeted with mariachi and welcome signs, this is the third flight from different airlines that connects Cozumel with Chicago and the fifteenth direct connection from Mexico and the United States. “Monterrey and Madrid are scheduled for next summer.”

Municipal President Pedro Joaquin was present to welcome the airline and passengers, who said that with the arrival of more flights and the announcement of the return of cruise ships in June to Cozumel, the economic and tourist reactivation to favor of the community

“Next week we will set a record in the number of weekly operations. Last week, with the ‘bridge’, we exceeded 50 percent of hotel occupancy and in the Easter holiday season, we expect to reach about 70 percent. This is good news for the island ”, stated the Municipal President.

Likewise, Pedro Joaquín Delbouis stressed that just one year after the arrival of the last cruise, the Royal Caribbean shipping company confirmed that the “Adventure of the Seas” will set sail on June 12 from The Bahamas, which will restore cruise tourism in the Caribbean and Cozumel will become the first tourist destination in Mexico and the Caribbean to receive this type of vessel.

“This is the result of a lot of work, many meetings, every week, with Royal Caribbean, the shipping companies, and the Government of Quintana Roo. Hopefully, the cruise arrives on June 14th or 15th. We are already working with two other cruise lines, with a high probability of joining in June as well and visiting the island ”, he stated.

It should be noted that Michael Bayley, president and CEO of Royal Caribbean International, and the president of the international cruise line Mediterranean Shiping Company Cruises (MSC), Richard Sasso, recognized the collaboration, support and leadership of Pedro Joaquín Delbouis for working in a safe and reliable destination for the return of cruise ships.