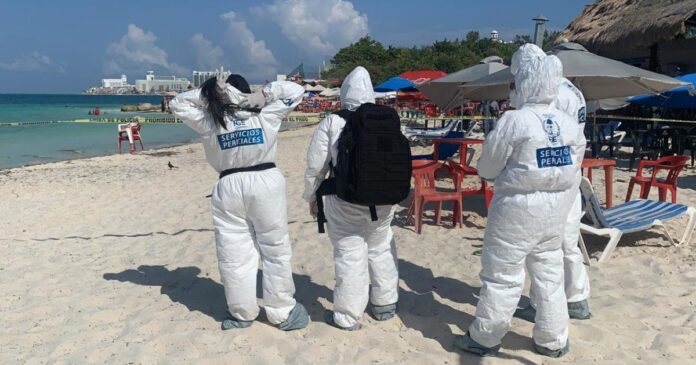 Two men died and an American tourist was injured in the shoulder during a shooting that broke out this Friday, June 11, on a beach in Cancun Mexican authorities reported.

The attack was registered around 2 in the afternoon at Playa Tortugas, located on 26 kilometer-long Kukulkan Boulevard, where all the most exclusive hotels are erected.

“Two men lost their lives due to gunshot wounds. A foreign woman was injured and was transferred to a hospital to receive medical attention,” the attorney for the state of Quintana Roo reported on Twitter.

According to a source from the Security Secretariat, the two men are Mexican, while the woman is originally from the United States. She was unaware of the incident and was hit by a bullet that wounded her shoulder.

In recent years, there have been armed attacks in this resort, but mostly in the urban area, without tourists being involved.

“The prosecution started the investigation folder related to the events that occurred on a public beach,” the institution added on Twitter.

According to witnesses, the attack, targeted two handicraft vendors, who died instantly.

“The attackers would have fled aboard jet skis into the open sea without being able to be located by authorities”, a witness who requested to protect his identity told AFP.

The area was cordoned off by personnel from the Mexican Navy Secretariat. Playa Tortugas is one of the busiest beaches in Cancun, frequented by both tourists and locals.

In this tourist destination, the largest recipient of foreign visitors in Mexico, there is a presence of organized crime gangs immersed in disputes over drug trafficking and extortion.

Since December 2006, when the federal government launched a controversial military anti-drug operation, there have been more than 300,000 violent deaths in Mexico, according to official figures that attribute most of the killings to criminal disputes.