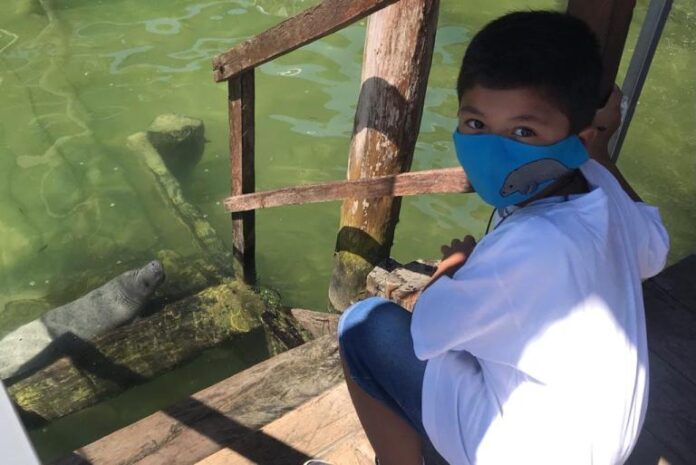 The winner explained that he wanted to baptize the baby in honor of Vice Admiral Othón Pompeyo Blanco Núñez de Cáceres since he was a prominent Mexican sailor who founded the city of Chetumal; and it is also the name of the municipality in which the baby was found and just a few know the meaning of the letter “P” (Pompeyo) contained in the abbreviation of Othón P. Blanco.

“In August of this year, the orphaned manatee calf was found in the MilagrosLlagoon in the town of Huay Pix. From that moment, in coordination with the Federal Attorney for Environmental Protection (PPA), the Institute of Biodiversity and Protected Natural Areas (IBANQROO), and members of the Network for Attention to Stranding of Marine Mammals, we developed actions to provide attention to the small specimen, to ensure its future reintegration into its natural environment ”, expressed in his participation Rafael Robles, head of IBANQROO.

Robles de Benito stressed that the rehabilitation process is long, it must be carried out under strict conditions of care, surveillance, supervision, and maintenance. Robles explained that the IBANQROO in compliance with the instruction of PROFEPA, an authority that has the attribution in the field of wildlife, provides the protection of the breeding in the Facilities of the Center for Attention and Rehabilitation of Aquatic Mammals (CARMA), facilitates the Transport and accommodation for volunteers in this enclosure, help with the care of the offspring with IBANQROO staff, and the corral facilities are being rehabilitated, thanks to the valuable support of the International Fund for Animal Welfare (IFAW).

Dr. Nataly Castelblanco Martínez, coordinator of the technical-scientific group of the Network for Attention to Stranding of Marine Mammals of the State of Quintana Roo explained that the small specimen is 100 centimeters long and weighs 18.5 kilograms, has gained 5 kilos since he was found in the Milagros Lagoon.

It is worth mentioning that boys and girls from 7 to 12 years old participated in the contest, 30 proposals were received. All were submitted to a vote through likes on the IBANQROO social network page, the ones that obtained the most votes were selected, they were subjected to evaluation by a qualifying jury, who chose the winning proposal.